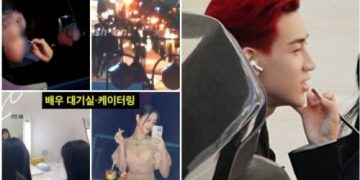 HOT- Dispatch accused Mnet of treating Idols unfairly at 2020 MAMA!
The most anticipated awards ceremony of the year and also the most scandals of the year must be the Mnet Asian Music Awards 2020 (MAMA). It seemed to have ended well, on December 7, MAMA was suddenly accused of discriminating between the actors and idols participating in the awards ceremony.

Specifically, the actors have their own waiting rooms and many famous idols have to wait outside the parking lot in cold weather. After more than a day of causing fierce controversy by netizens, on the afternoon of December 8, Mnet – the organization unit of MAMA, officially gave a response. However, not long after that, Dispatch reported against Mnet.
Dispatch has gone a step further and revealed what they claim to be the truth.
Through talking to unnamed representatives from the idols’ agencies, it was revealed that most idols were not given any waiting rooms or dressing rooms. They had to wait in their cars in the parking lot. Only two idol groups were given proper waiting rooms. Those that waited in cars had to use outdoor portable toilets.