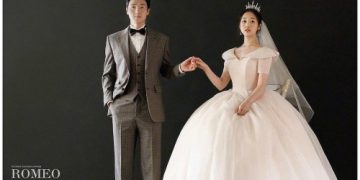 According to reports from Korean media, the wedding of actress Park Bo Mi and soccer player Park Yohan (31 years old) was held at 17:00 (KST) at the Seoul Eliena Hotel on the afternoon of December 6.

The couple decided to get married after more than a year of dating. In an interview published with the wedding photo, Park Bo Mi said, “We both understand each other and our personalities match well. He is the one who helped me develop in a good direction. I decided to conclude. kiss because I believe I can overcome many challenges if I accompany him “.

On the social network account, Park Bo Mi added: “You are a sincere and wise guy to make the decision to live together in the future. He is a better person to me than anyone. Above all, he is also someone who will be ready to protect, protect me if there is your presence “.

Through FC Anyang, Park Yohan said: “I regret having to announce the news of my marriage during a difficult time due to the Covid-19 epidemic. I will live well by remembering this gratitude. your”.

Meanwhile, Park Bo Mi debuted as a comedian for the 29th KBS station in 2014. After playing an active role on KBS 2TV’s Gag Concert and tvN’s SNL Korea, She has switched to acting. In particular, Park Bo Mi appeared in two popular dramas, Strong Woman, Do Bong Soon and Mr. Sunshine.

“Park Bo Young gave me strength. Without her, I was really in trouble. She always helps me out in acting even though she’s probably exhausted from filming all of her scenes.” There was a scene where I had to cry, but tears couldn’t come out. Then Park Bo Young came and hugged me, and we started arguing. Somehow, she has the ability to bring emotions to me. “.