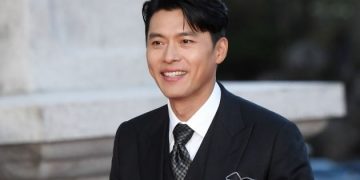 Actor Hyun bin, who is loved by a lot of people, has brought a global syndrome through the tvN drama ‘Crash Landing On You ‘ . This year, as all of Asia is shaken with the Hyun Bin syndrome, the explosive popularity in Japan has led to a hot topic.

In the afternoon of the 1st in Tokyo, Japan’s’Basic Knowledge Line of Free People’s History Modern Terms 2020 Yucan New Vogue Vogue’ was selected as a keyword for Korea’s’Crash Landing on You/ 4th Hallyu Boom’. Hyunbin won the award.

Hyun bin said, “As it is a meaningful award made of the warm hearts sent to our drama, I am more impressed. I will share it with the people.” He expressed his heartfelt impression of the award through the video.

The “New Words and Popular Words 2020” run by the Japanese publishing company Free Kookmin, is a symbolic awards ceremony that selects 10 keywords that have been loved or popularized by the public throughout the year, starting in 1984. Every year, selected buzzwords are summarized and published as a book entitled’Basic Knowledge of Modern Terms’, and it is an awards ceremony that deals with Japanese media too.

On the other hand, Hyun bin is gaining popularity with a syndrome, both domestically and overseas through the drama’Crash Landing on You’. He has recently finished filming the film ‘The Negotiation’, and is selected as the first Korean global ambassador of the global watch brand OMEGA, demonstrating its popularity across borders and cultures, demonstrating hot Hallyu power.