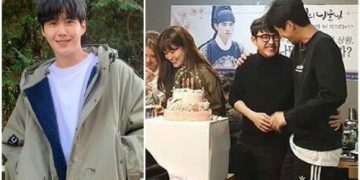 Actor Kim Seon Ho is making a name for himself through his roles in the popular Netflix drama, Startup with Suzy, and as a result, recently, a previous interview by Kim Seon Ho started going viral online.

The interview began in 2018, after Kim Seon Ho finished filming the love drama by D.O. leads ‘100 Days My Prince’.

Seon Ho said, “D.O. invited me to EXO’s concert not too long ago. It occurred at Gocheok Sky Dome.”

He continued, “Me and the other cast members were to meet up at a coffee shop in prior to the concert. I got to the venue first, so I looked around different coffee shops, but there were no seats anywhere.”

He went on, “There were so many people there. It seemed like all middle school and high school from parts of Korea had come together at Gocheok Sky Dome.”
The actor resumed, “When I was there, I noticed some fans referring D.O. as ‘Our Kyung-soo’. I was like, ‘Do they know D.O. as well? Are they all friends of him too?'”

He laughingly added, “After seeing how many fans D.O. had, I felt relieved. I was sure that ‘100 Days My Prince’ was not going to be unsuccessful.”