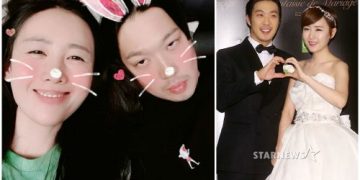 Byul and HaHa are celebrating their wedding day

Byul and HaHa are celebrating their wedding day!

Yesterday, Haha’s Wife Byul posted a sweet message for her husband, HaHa on her Instagram to celebrate their 8th wedding anniversary. Along with a set of fun selfies together, she wrote:

This year, it’ll be a night at home. Hahaha …

After putting the kids to sleep today, the two of us can cozy up and snack while watching Netflix together for the first time in awhile. (The catch… is that they’re not… sleeping… yet).

You’re doing great… Let’s have strength. Let’s continue to live well while comforting one another like now. Thanks. ”