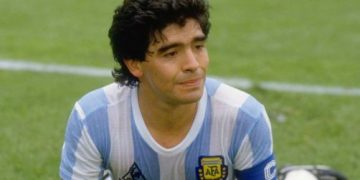 Football legend Maradona died at the age of 60

Today, the home page of the Argentine Football Federation and the media of this country announced the news that shocked all football fans in the world.

Legendary Maradona passed away at the age of 60 from a heart attack. He was hospitalized in early November, a few days after his birthday party, tired and mentally poor. At the end of October, while directing the Gymnasia team to play, Maradona felt unwell and had to leave the field from the first half. Tests revealed a blood clot on Maradona’s brain, after which he was successfully operated.

On 11/11, Maradona was discharged from the hospital for outpatient treatment at his home in Tigres, north of the capital Buenos Aires (Argentina). But on Monday morning, Maradona had a cardiac arrest and the doctors who tried their best could not save him from the scythe of death. At the time of Maradona’s death, four ambulances appeared at his home.

The announcement on the Argentina Football Federation’s homepage: “Through President Claudio Tapia, we express our infinite grief over the death of legend Diego Armando Maradona. He will forever be in everyone’s hearts” .

Maradona had been fighting illnesses for years. Maradona’s heart and liver suffered a series of damage, the result of years of drug and alcohol use. Famous for being talented but with many disabilities, Maradona was suspended for 15 months in 1991, after being discovered using cocaine. At the 1994 World Cup, Maradona was removed from the team for being positive for the banned substance and has been permanently banned from international competitions ever since.

“Golden Boy” Maradona is considered one of the two greatest football legends in the world, next to the Pele football king. He attended four World Cups and received many noble titles, including the title Player of the century voted by online audiences and ranked second in the list of the 100 best players in the world of the century. 20 of World Soccer, just behind Pele.

Maradona won many trophies with Boca Juniors, Barcelona and Napoli during his career. He played for the Argentina national team 91 times and scored 34 goals, leading the Argentina team to win the 1986 World Cup and always won the title of “Best Player” in this tournament. His first goal against England in the quarter-finals of that tournament was scored by Maradona by hand, who he later called “The Hand of God”. The second goal, a 60-meter dribble, tricked past six English players, was considered the Goal of the Century.