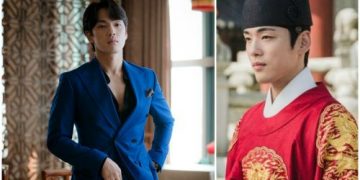 Remade from Go Princess Go, Mr. Queen revolves around the soul of a modern chef Jang Bong Hwan who was swept into the past, transformed into the body of Queen Kim So Yong (Shin Hye Sun) in the Joseon period. In the Korean version, King Cheol Jong (Kim Jung Hyun) is ostensibly a “puppet monarch”, he only knows how to follow the orders of Queen Sunwon, but inside is a talented person.

The trailer begins with King Cheol Jong sitting on the throne. He looked at the mandarins with sleepy eyes. The room was engulfed in silence, and the court held its breath, waiting for his decision. King Cheol Jong declared: “Do what you want. It is my will” and the gods smiled with satisfaction.

However, things change at night. His eyes became sharp and he was no longer a soulless puppet king. He trained his sword with steadfast eyes. The only person who knows this is Kim So Yong. She looked at him with doubtful eyes and commented: “What a suspicious guy”.

Mr. Queen aired on tvN on December 12, after Start Up ended