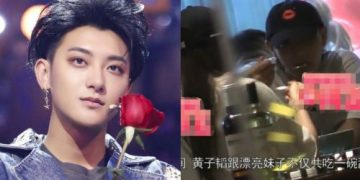 HOT- Netizen Stunned when Former EXO member Tao confessed his true love to IU and he was flirting with IU.

On November 21, Tao adopted his Weibo account and interacted with fans through a live streaming video. During the livestream, Tao mentioned his “love” for a Korean female singer, whom netizens believe was IU. He said, “I have a girl that I really like. I’ve sent her a DM, but there’s no answer.”

tao cursing at the place and then seeing IU ig posts pic.twitter.com/AGCSEe2vQv

“If this becomes a hot topic tomorrow, then I hope that that person will also find out that I love you a lot. If that person likes me back, I can reveal everything in a heartbeat,” he continued.

Although Tao did not reveal the exact name of the Korean female singer, netizens are asserting that she is IU, based on a photo he posted. On his Weibo, Tao uploaded a photo of IU, then proceeded to edit the post. Furthermore, IU is one of the only three accounts Tao follows on Instagram, the rest belonging to his agency L. Tao Entertainment.

Lol Tao😅, he followed IU on April this yr then unfollowed everyone on his following in July and now he's following IU again She's among the 3 of his following currently on instagram,even like her 2 latest posts.🤣 pic.twitter.com/zaf2L9UcgU

After his livestream, Tao overtly stated that his love is “not a fan’s love but real love,” and that others should not fuss over it if they “cannot understand.” To some comments that derided his statements, he said, “You are the worst.”

HSDHSHSHASD LOOK AT THIS BIG BABY OMGGGG🤭🤭🤭🤭🤭
the way he didn't even try to hide it LMAO😂😂❤️ the boy is wHiPpEd
TAO AND IU PLEASE MAKE IT HAPPEN OMGGGGGGG🤭🤭🤭🤭 pic.twitter.com/NManLBh52r

On the other hand, netizens who saw this confession reacted with comments such as, “What ??”, “Um, so what does he want us to do about it?”, “Does he have delirium?”, “Even if a celebrity that has a good image did that that would not be acceptable “,” Um, this might make IU uncomfortable, so idk ……… “,” I don’t think this is very respectful towards IU ” , “Is he marriage considering?”.