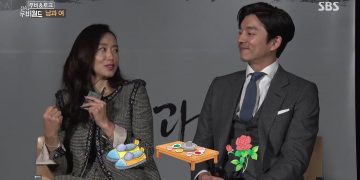 HOT- Gong Yoo dated a girl outside the entertainment industry, he and his girlfriend quickly broke up because of different personalities.
Gong Yoo is currently one of the most popular actors on the Korean screen. He rarely shares a love story, but during his appearance on the show Because I Just Want To Talk, Gong Yoo talked about his old love story.
It is known that he and his ex-girlfriend had a happy time, but the two quickly broke up.
According to him, his ex-girlfriend is a person outside the entertainment industry. She is gentle and cares for him.
During an uncontrollable drunken time, Gong Yoo texted his ex-girlfriend. The message was “Are you sleeping?”, But the actor’s ex-girlfriend did not reply. The next morning, actor Train To Busan texted explaining: “The truth was that I was quite drunk last night”. Even though all of these messages went unresponsive, Gong Yoo feels grateful that it keeps the relationship from becoming not awkward.