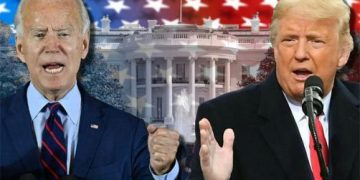 Now with only a few hours left, when the states finally finish checking their ballots, the new President of America will be determined who is.
According to a survey of many media outlets in Asia, 80% of people across Asia want Donald Trump to win Joe biden in the 2020 US election.
So why do Asians want Donald Trump to continue leading America for the next four years?
China’s influence and bossy attitudes have brought anxiety to people across Asia. So President Donald Trump, taking a stance against China, will make the people of Asia support him.
The administration of President Donald Trump takes a position against China in all aspects, from trade, technology, and the Covid-19 pandemic to the South China Sea and Taiwan issue. President Trump has exerted tensions with Asian allies by threatening to reduce US troops in Japan and South Korea, while building a direct relationship with North Korean leader Kim Jong Un.

The financial and technology split with China is also underway. The proof is that Washington imposes sanctions on some of the major Chinese tech companies such as Huawei and TikTok. If Mr. Biden becomes head of the United States, he will inherit the US-China Trade Agreement Phase 1 in the context of Beijing’s failure to fulfill its promise of purchase and trade relations with Asia shaken by the US, withdrew from the Trans-Pacific Partnership (TPP), now the Comprehensive and Progressive Agreement for Trans-Pacific Partnership (CPTPP).

During the campaign, Mr. Biden’s stance on China seems closer to his opponent than that of Obama. Even during a debate, he did not hesitate to call Chinese President Xi Jinping a “ruffian”. Many analysts believe that Mr. Trump’s tough approach to China will continue even under a Democratic president.
However, Asians worry Joe Biden will soften relations with China when he wins the election.