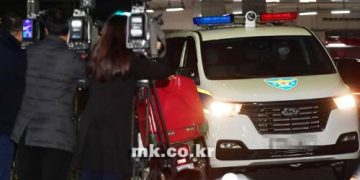 On November 3, Seoul’s Mapo Police Department issued an official statement to the press, confirming that they will not conduct an autopsy on the late comedian Park Ji Sun (36 years old). .

According to Mapo Police, the autopsy would not be done according to her family’s wishes, as they added, “There were no signs of outsider entry on the scene, and also taking into account the memo found closely resembling a will, it is likely that there was no criminal offense involved.”

Meanwhile, earlier reports revealed that the will found at the scene, allegedly written by Park Ji Sun’s deceased mother, refers to the late comedian’s recent illness.

A memorial room was prepared for the late Park Ji Sun and her mother at Ewha Womans University’s Mokdong Funeral Center.
Her funeral will be held privately according to the wishes of the dentist.