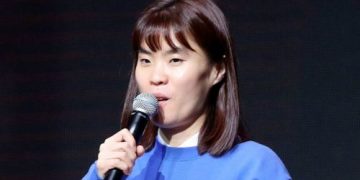 HEARTBREAKING: Park Ji sun mother suicide letter ‘I can’t send only my daughter who is suffering from skin diseases’

HEARTBREAKING: Park Ji sun mother suicide letter ‘I can’t send only my daughter who is suffering from skin diseases’

Many celebrities and netizens are mourning the late comedian.
In relation to the case where comedian Park Ji-seon (36) was found dead with her mother at home on the 2nd, a note that is believed to have been left by her mother as a result of Chosun and Naver report says, It was harder to do. It is reported that it contains the content that only daughters cannot be sent alone.

The Seoul Mapo Police Station received a report from Mr. Park’s father on this day stating that’wife and daughter are not answering the phone’ and visited Park’s home in Mapo-gu, Seoul with Mr. Park’s father. He said he found it. It is said that Park’s family, who is from Incheon, only lived with Park in Seoul with their mother, and their father lived separately.

At the scene, there was a memo of one notebook, which seems to have been written by Park’s mother. In summary, in this memo,’Daughter (Park’s) suffered from a skin disease, and recently, in the process of treating other diseases, the skin disease has worsened, making it more difficult. You cannot send your daughter alone It is said that it contains the content of the purpose of’I’m sorry to my husband (Park’s father).’ In an interview in 2014, Park once revealed that she suffers from a sun allergy, which causes itchiness or rash when exposed to sunlight, and that she cannot even make up because her skin is sensitive.

However, Park has been actively engaged in various events until mid-last month. Then, on the 23rd of last month, he underwent an operation with unknown contents. On the day of the surgery, he told Sports Chosun and said, “I decided to operate today (October 23). It is a small surgery, so you do not have to worry. November will be dedicated to recovery.” After that, outside activities were cut off. When the entertainment industry makes a call, Mr. Park said, “It is difficult to respond because I am not feeling well. I think I have to go to a big hospital.”

The mother and daughter’s body did not have any clear clues to presume the cause of death, and the police were reported to be putting weight on the possibility of poisoning. A police official said, “We are investigating the death of the mother and daughter, but it is judged that the likelihood of death is low.”

Park, a graduate of Korea University’s Department of Education, debuted as a public comedian for the 22nd KBS in 2007, and since then, with a versatile appearance, he has won the entertainment industry. In the comedy category at the KBS Entertainment Awards, he received the Rookie of the Year award in his first year of debut, excellence in 2008, and the best award in 2010. He also worked as a radio DJ, and in 2012 he received the SBS Entertainment Awards as a radio DJ.