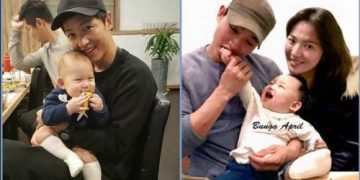 It has been more than 2 years since Song Joong Ki – Song Hye Kyo divorced, rumors are still appearing around the couple. Netizens are still constantly asking the real reason why the golden couple broke, why a dream love story, a wedding of the century, can all end so quickly.

Amid a series of rumors and speculations about Song – Song’s marriage, a friend of Song Hye Kyo revealed that Song Hye Kyo had a plan to become pregnant after the end of the movie Encounter, starring with Park Bo Gum. After that, however, it all failed. Netizens believe that it is possible that the marriage will be different if that day Song Hye Kyo becomes pregnant.

According to the actress’s friend, this news has been tingled by people in the entertainment industry for a long time, because Song Hye Kyo will need to arrange projects, complete the signed contract before becoming pregnant. Song Hye Kyo intends that when the Encounter is closed, she will stop working and to prepare to have a baby.

However, in the end, instead of halting activities, Song Hye Kyo looked for new projects after Encounter ended. This makes people in the industry speculate that the Song – Song couple has signs of rift. And yes, in the end Song Joong Ki – Song Hye Kyo got divorced after just 18 months of marriage. There have been many rumors that the couple gradually separated because of different views in having children, Song Joong Ki is ready to be a father and Song Hye Kyo is still engrossed in career.

Despite rumors, the actress’s agency has never once confirmed her pregnancy plan.
Source: Kenh14