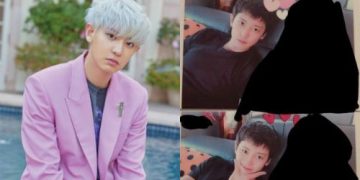 Chanyeol’s ex-girlfriend alleges that Chanyeol cheated on her and revealed her disgust to know Chanyeol slept with 10 other girls in 3 years dating her.
On October 28, the online community stirred when a netizen claiming to be the ex-girlfriend of EXO member Chanyeol for 3 years began to expose the artist for his wrongdoings.

The netizen posted on an online community and left a long letter to Chanyeol expressing her anger. She started saying that the karma affected the EXO member and started claiming that Chanyeol cheated on her during the 3 years they were dating.

Netizens posted various photos of the artist as the information spread across the web. She posted and expressed her disgust to learn about the number of people Chanyeol slept with while dating her.

“I don’t know if I’m allowed to post pictures so I take them down, but anyone who needs proof can re-download it.

Hi Chan__. I don’t know if you read this online community or not. I decided to write something like this, which I never did, to expose you. You must be surprised to see something written from me when you think we broke up. Well, I feel dirty and disgusting thinking about the three years I was fooled by you. Chan__ this is karma that you take on yourself.

We start dating when you ask one of my acquaintances for my number. We started dating officially when you asked me out.
Then I discovered the shocking truth of the three years we’ve been dating.

I tried not to believe in anything unless I had seen and witnessed my own years. I even believed you when you denied everything.

But you are someone else’s first experience when you have a one-night affair with another person. I was very ignorant when you slept with the new woman while I was sleeping.

You’re too busy living your dirty life. There are many different types of women like girl group members, YouTube live streamers, flight attendants, and more.
Are you happy?

You are very famous.

Everyone around you knows how dirty you are except me.

Really, everyone knows about except me and your fans.

I think it’s weird that you can’t protect me when the member you don’t like tries to flirt with me without knowing our relationship.

You can’t even express your dissatisfaction in that situation and just curse him behind your back. Now I realize that you cannot be confident with your actions.

I told you as a joke that if you were going to deceive me, don’t tell me about it.

But I cheated on you quite a lot …

I heard there were ten or more of what I heard C.yeol.

If you are a nice person, you shouldn’t do it to people I know.

Less than two days after we parted, you called and told you all I heard, but you acted like you didn’t know anything. I told you the names of the girls you slept with; you are silent for three seconds then you say, ‘Is she?’ I was very confused.

But you know what? I recorded that because there are victims who want to hear your excuses.

Do you know what’s funny? You never said that you don’t know the girls that I named the people you slept with. At least you should pretend like you don’t. You have to think about me very gently. You are not even scared. What made me fooled by you for three years?

If it is my fault, it is that I don’t know you are this kind of person and try to protect you, trust you, and dislike people.

I think that’s the only mistake I have.

I tried to hide the photos we took together in case it came out and I think it will put you in trouble at work. So I didn’t even tell my best friends that I had a boyfriend.

I trusted you when you told me you would die if your career in the music industry was affected by the issue of girls. So I have been busy trying to shield you.

I won’t mention anything other than this that could turn out to be a bigger problem.

You probably know what is about.

My heart dropped when I heard your name.

I wish everyone in the world knows what a bad person you are. ”