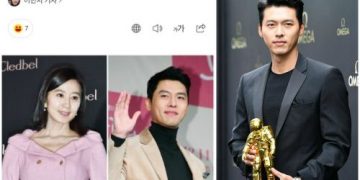 On the morning of October 28, Korean media announced that Hyun Bin had excellently won the Korean Popular Culture & Arts Awards 2020 thanks to the success of the movie ‘Crash Landing On You’ which received great love from the audience Asian imitation. It is known that this is an award organized by the Korean government, in order to recognize the contributions made by artists in many different fields to the development of national culture and the development of the country.

However, her co-star with Hyun Bin in Crash Landing On You, Son Ye Jin, did not receive the award this year, because in 2018 she was awarded this award by the President of Korea for her dedication to development. film industry after the successes of the films Something In The Rain and The Life and Death Negotiation.

Accordingly, actress Kim Hee Ae, after the success of The World of the Married, became the female artist to receive this award this year.
It is worth mentioning that a few days earlier, Son Ye Jin filmed a video greeting the audience of this year’s Korean Popular Culture & Arts Awards, and congratulated the artists who have won, but the actress. Not mentioning Hyun Bin or anyone, so the audience did not notice. And it was not until the Korean media announced that Hyun Bin had won that fans discovered that she might already know this before.