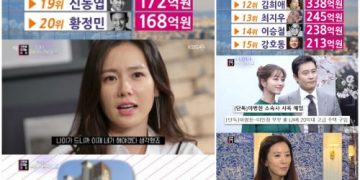 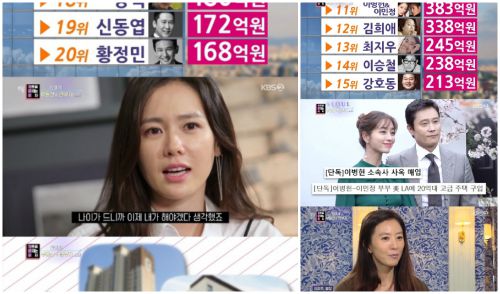 A few days ago, Son Ye Jin surprised the entertainment industry by revealing that she had just bought a 16 billion won building in the Sinsa Dong area, Seoul. This information received the attention of audiences all over Asia because few people know that the actress owns such a huge fortune.

When Hyun Bin and famous actors wanted to become idols?

Accordingly, the show revealed that Son Ye Jin holds the No. 17 position among artists with a valuable fortune. As revealed, the actress owns real estate worth 19.8 billion won, including her own villa located in Samseong Dong.

Kim Hee Ae ranked 12th. It is known that after the actress bought a luxury car park in Cheongdam Dong in 2006 for about 11.9 billion won, the land has now increased in price to about 27 billion won. . In addition, the actress also owns an apartment worth about 5.3 billion won in Apgujeong and a villa on Jeju Island.

In 18th place is Jang Hyuk, who owns the Nonhyeon Dong building valued at about 18 billion won. Ranked 19th is Shin Dong Yeop. Hwang Jung Min is also on the list with the 20th place when he owns a total real estate asset worth 16.8 billion won.

Yoona (SNSD) is in 21st place. She owns an apartment in Samseong Dong worth 2.5 billion won and a building in Cheongdam dong worth 14.2 billion won, accounting for total real estate assets. 16.7 billion won. Actress Gong Hyo Jin is at No. 22. Song Joong Ki is currently at 23rd. Hwang Jung Eum at 24 and Song Hye Kyo at 25.

Immediately after the show aired, many audiences were surprised at the richness of the artists. In particular, the names like BTS, BLACKPINK or Son Ye Jin’s “rumored lover” – Hyun Bin were not revealed.