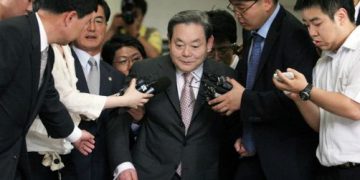 Mr. Lee Kun-hee, who changed the entire Samsung Group from an ordinary brand to the world’s largest manufacturer of smartphones, TVs and memory chips. He passed away on October 25, at the age of 78.

According to an official announcement from Samsung, Samsung Group Chairman Lee Kun-hee passed away on October 25 with his family, but did not mention the cause of the death. He has had surgery and fell into a coma since 2014 after a heart attack, and has been treated for lung cancer since the late 1990s.

Chairman Lee Kun-hee is known for urging employees to “change everything except for their wives and children” at a time when Samsung was confronted by its biggest rival, Sony. Currently, he is the richest man in South Korea, with an estimated personal fortune of 20.7 billion USD. After surgery in 2014, Samsung Group was led by his only son – Lee Jae Yong – to run.

“It is with great sadness that we announce the passing of Lee Kun-hee, Chairman of Samsung Electronics. Chairman Lee passed away on October 25 with his family, including Vice Chairman Lee Jae-yong, by his side,” the company said in a statement.

Chairman Lee Kun-hee built the company into an empire, a symbol of Korea’s growth in the global economic sphere. He was listed by Time magazine in the list of 100 most influential names in the world in 2005. He led the corporation in the late 1980s, after the death of his father and founder Lee Byung-chul. Seeing that the company’s products could not be sold in US electronics stores, he decided to change.

In his 2010 autobiography “The Lee Kun Hee Story”, then the late President Lee realized that Samsung was just a name known as copycats, producing cheap, quality products. short. He decided to send up to 6,000 people to fix the products made by 30,000 workers. In 1993, Samsung started to innovate when Lee, bringing together top German experts, began to formulate a plan to make Samsung the leader of the electronics industry. Their mission was different then, which was to make high-quality products, even though it caused lower sales.

Today, Samsung Electronics is a leading company that has become an important factor in the Korean economy.