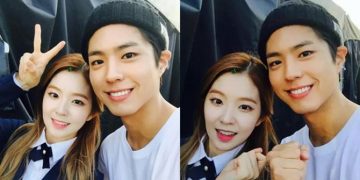 During the time, fans were keeping an eye on Irene and Bo Gum’s behavior and looking for signs that the sweetness they see on stage was rooted in something more.

It can be recalled that Irene and Park Bo Gum had great chemistry on stage. They were very comfortable with each other and they were both visually stunning, making them highly shippable.

Park Bo Gum was also very caring towards Irene, often veering off the script to offer compliments or doing thoughtful things like offering a jacket or assisting Irene to descend the stairs. On some occasions, Bo Gum caused fans’ hearts to flutter because he called Irene by her real name.

“This is Irene.
I sincerely apologize for hurting the stylist with my foolish attitude and careless words and actions.
I received a lot of help from people who gave their effort for me to get to where I am now, and I regret that I hurt them greatly with my immature behavior.
This incident has made me look back on the past, and I’m very ashamed of my poor words and actions, and I feel the importance of staff members once again.
I’ll think and act more carefully, so this does not happen again.
I’m truly sorry to the fans who support me and for causing worry because of this incident.”
As previously reported, editor Kang Kook Hwa released a first-hand account of how she was mistreated by a celebrity, and many netizens speculated the person in question was Red Velvet member Irene because of the editor’s hashtags “Monster” and “Psycho”.

What are your thoughts on Irene’s admission and apology? Did you believe she was the idol in question from the start or did you doubt the allegations?