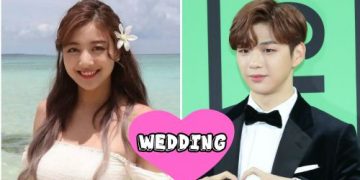 However, after the dating information was a series of backwards fans from both sides, Kang Daniel’s fans did not accept the guy with a lover when he just debuted.

Remember on this day 1 year ago, Dispatch released a series of shocking dating photos of Kang Daniel and the leader of TWICE – Jihyo. Unbelievable about their love story when there is no interaction, the insider has confirmed they are in a romantic relationship.

This is a couple that are considered talented boys and girls, they are all top K-pop artists with no less popularity and beauty. While Kang Daniel is popular with the title of “national center”, Jihyo is the leader of TWICE, a top group.

However, along with this dating news is the turning of fans, unbelievable he betrayed fans’ trust when starting his solo career for 2 weeks, while they put all their energy into it to support.

Most K-pop fans do not want their idols to date too soon and Kang Daniel fans have a stronger thought, even Jihyo fans have taken action to tear TWICE’s albums “shocking” for a long time.

After 1 year the couple are still together

Under pressure from public criticism, a year later they are still together, so far the couple has never spoken out about ending this relationship. There are rumors of both “the way everyone goes” but the confirmation of the insider is the most important.

During the past 1 year, many times fans saw Jihyo burst into tears at the airport, during the event … This may be due to the pressure she has to face after dating information. But now Jihyo is doing a good job as the leader of TWICE and her image is getting prettier.

Meanwhile, Kang Daniel actively released more products to dedicate to the audience, he constantly changes new images, releasing new albums for fans. If dating idols can still focus their work so well, why are there still people objecting later?

Jihyo has a big crisis while dating

Not long ago, Jihyo appeared with a blank face at the airport, a clip recording the image of her that worried fans.

Specifically, Jihyo silently took heavy steps and then the clip was recorded by the Korean media where she was carried by TWICE members Sana and Chaeyoung, according to fans present at the airport, stumbled on a fan then fell and hurt.

However, this did not make her cry that much, the deep reason why Jihyo cried was probably the pressure she had to endure for a long time.

A year has passed since making their love public, Kang Daniel and Jihyo turned to secret dating, not appearing together, not mentioning each other, avoiding meeting in events. The couple was suspected by the Korean audience and media that they broke up due to a series of incidents such as not paying attention to each other at AAA 2019 Vietnam, shortly after that a famous Indonesian artist confirmed that they had farewell; Daniel continued to press the button to follow the Instagram of a strange girl … But recently at the Soribada Best K-Music Awards 2020, thanks to a small detail that fans gave as evidence to prove proves that Kang Daniel and TWICE’s Jihyo are still happy together.

Specifically, the small detail that netizens can spot here is … a signature. At the end of the awards ceremony, the participating artists signed their names on a wall. Here, Kang Daniel bent down to the low corner to sign. After a while, TWICE came to sign and after it was done, Jihyo suddenly lingered to sign one more time next to Kang Daniel’s signature.

This action made the fans of the couple happy, when it was confirmed that the rumors that the couple had “broke” were bullshit, Daniel and Jihyo were still happy together. However, many people think that leader Jihyo only signed on behalf of the absent member Jeongyeon, she signed next to Kang Daniel’s signature because there was no room above.