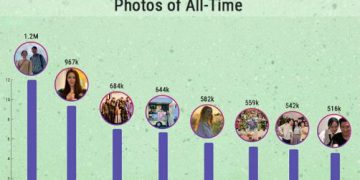 Son Ye Jin has starred in a number of Korean dramas. Veteran K-drama fans have seen the actress in franchises like Personal Taste, opposite Lee Min Ho, Don’t Look Back: The Legend of Orpheus starring Kim Nam Gil and Something. in the Rain with Jung Hae In. However, her popularity reached new heights when she starred in Crash Landing On You. Son Ye Jin plays with Hyun Bin. While the series is popular in Korea, K-drama has also gained worldwide viewership.

While the drama’s fandom has grown with the show’s popularity, Son Ye Jin has also seen a change in the number of likes on her Instagram posts. When following the actress on a social media platform, we found that the likes on some of the original posts were relatively lower than the ones she had posted over the past two years. The actress currently has more than 3.3 million followers.

As surprising as it may seem, Son Ye Jin’s most beloved Instagram post is from the final days of the Crash Landing On You shoot. The frame features Son Ye Jin and Hyun Bin. The photo has more than 1.2 million likes. Other photos that were among the most liked posts from her social media account include a few more from the movie Crash Landing On You, pictures of love that fans have for her after the Baeksang Art Awards and some solo photos.

Check out the 8 most popular photos on Instagram by Son Ye Jin: