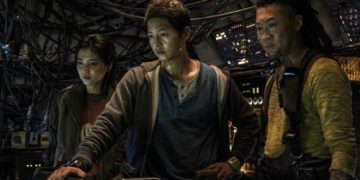 Song Joong Ki’s blockbuster Space Sweepers announced it will premiere on Netflix because of the Covid-19 epidemic!
After having to postpone theaters for 2 times because of COVID-19, Space Sweepers – the fictional blockbuster of Song Joong Ki and Kim Tae Ri gave up the ambition to attack the big screen. On October 16, Korean media reported that the film will be released directly on the Netflix platform.

Space Sweepers is not the first Korean film to be shown live on an online movie site. Before that, Choi Woo Sik’s Time To Hunt had to be released online. Call – a movie by Park Shin Hye and Night in Paradise – director New World Park Hoon Jung’s comeback work must also be shown on Netflix. It seems that Korean movies are moving towards their Netflix platform release due to the severe drop in box office revenue.
Sweepers Space is a space science film built by a crew aboard the space junk ship, The Victory. When they discovered a humanoid robot named Dorothy, known as a weapon of mass destruction, they entered into a risky business deal. It stars-studded cast including Song Joong Ki, Kim Tae Ri, Jin Seon Kyu, Yoo Hae Jin, …
Space Sweepers has no official broadcast date.