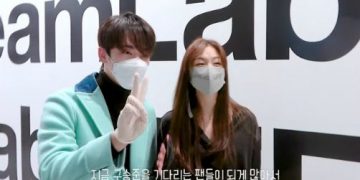 The movie Crash Landing On You ended long ago, however its influence is still quite large in the hearts of audiences. If the main couple Jung Hyuk (Hyun Bin) – Se Ri (Son Ye Jin) is favored for a happy ending, the supporting couple Seung Jun (Kim Jung Hyun) – Seo Dan (Seo Ji Hye) is sad ending. The end of the couple’s love story still hurts many viewers by looking back on their journey to love, we can see that both deserve a happier ending. Because of that, many viewers hope that the two will reunite soon because they are extremely beautiful together. 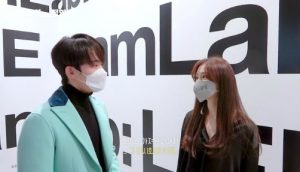 On the evening of October 13, both Kim Jung Hyun and Seo Ji Hye suddenly reunited together in an event since Crash Landing On You ended. The couple’s reunion quickly “stormed” on Twitter and was discussed by many audiences.

As soon as appeared, Kim Jung Hyun did not hesitate to call Seo Ji Hye with a familiar name in the movie as Seo Dan, and she quickly responded when calling the actor Seung Jun. Not only that, Kim Jung Hyun also wore the shirt used in Crash Landing On You, and revealed that the film’s director also appeared at the event right on the livestream, making the audience extremely excited. 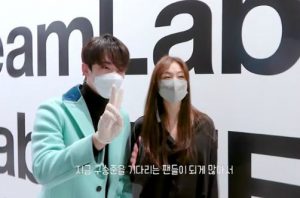 However, what made a part of the audience most disappointed is that this event was Hyun Bin – Son Ye Jin’s absence. Netizens believe that it is also possible that the couple is trying to avoid their presence, so they do not appear in the event because there are too many dating rumors that constantly surround the couple after Crash Landing On You ends. However, this is only a fan hypothesis because Hyun Bin and Son Ye Jin were probably invited. But this still makes the audience a bit regretful because it has been a long time since Crash Landing On You’s crew has not had the opportunity to fully reunite.

It is known that Crash Landing On You is currently in the list of best Asian film nominations at the Asia Contents Awards within the framework of the 25th Busan International Film Festival. This will be an opportunity for the film crew to reunite.