Son Ye Jin and Hyun Bin are again believed to be dating because of some sharp-eyed netizens who believe they were secretly holding hands while filming.

Although the two actors previously denied that they were dating, a video that showed the behind the scenes filming of ‘Crash Landing On You’ became popular after a screen capture showed what seems to be Hyun Bin holding Son Ye Jin’s hand under the table. 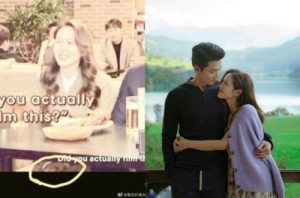 A netizen zoomed in on a screen capture from the scene, brightened the image, and wrote on an online community forum that they were holding hands.

The drama has skyrocketed in ratings due to the growing attention to the possible dating rumors among international fans as well. Netizen comments include:

“If they’re dating to the point where they’re holding hands and not aware of it, it’s obvious.”

“They may have their reasons but it’s really funny how they’re denying it even though it’s obvious.”