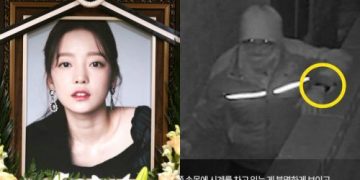 Dispatch: Goo Hara’s house was stolen by a thief and took away a safe and documents!
On today (October 12), Dispatch published exclusive news, revealing that the house of the deceased female idol Goo Hara was intruded by a thief, 49 days after her death. A safe was stolen from the house of late star Goo Hara. Based on the CCTV footage, Goo Hara’s family suspects that the thief is a relative and knows the female idol .
Goo Hara’s acquaintance “K” said, “I noticed that the safe had gone missing back in April. I checked the CCTV footage together with her brother Goo Ho In and saw that there was a clip in which the lens had been covered with leaves. I think it was an attempt to obscure their identity.” “K” also noted that they had changed the password to the house after Goo Hara’s passing. “Goo Ho In and I are the only ones who know the password,” they said. “The person appeared to press the keys for the old password.”
Based on factors such as how the perpetrator climbed over the wall, how they seemed to know the previous house password, and how they knew the exact location of the safe, “K” and Goo Ho In believe that the robbery was committed by someone who knew Goo Hara personally.

Goo Ho In remarked, “This is a person who knows the layout of the house well. Someone who is coming to the house for the first time wouldn’t know things such as how the connected door isn’t locked.” In addition, “K” said, “The door in the dressing room [in which the safe is located] isn’t locked. This is the work of someone who knows of this fact.”

Goo Ho In’s lawyer explained, “Although the case was reported to the police in May, the progress of the investigation is stalled due to the lack of information about the suspect. Furthermore, the contents of the safe are also unknown.” The lawyer also noted that tip-offs from informants would be crucial to the progression of the investigation.