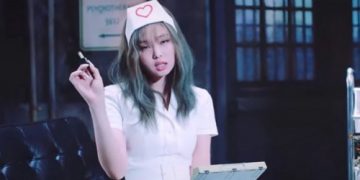 “First and foremost, we would like to relay our deep respect once again to the professional nurses who are fighting on the front lines, always watching over patients on site.
Next, the track ‘Lovesick Girls’ asks the question of why people look for love even after being hurt by it and suffering from it, and also relays a message of hope in the exploration of this idea of love.
The scene in the ‘Lovesick Girls’ MV depicting a nurse and a patient portrays the lyrics which read, ‘No doctor could help when I’m lovesick’.
The scene intended no other purpose, and we feel concerned that this scene has fallen under exaggerated scrutiny.
We ask audiences to view this MV as another genre of independent art, and we would be grateful if audiences could understand that each scene visually portrays the lyrics of the music, with no further meanings behind it.
Nonetheless, the MV production staff is currently deeply considering the editing of the scene in question.”
Here is the opinion of knet on Allkpop:
‘I’m a nurse and I’m not slightest offended by it. Medical professionals are now wearing scrub suits. It’s been so long that the classic nursing uniform has been sexualized, thanks to the porn industry.’
‘Jennie is literally just playing a nurse and a patient that depict absolutely innocent lyrics, was she supposed to wear a real medical attire for their MV? let’s then criticize sexy policemen portrayals that male idols take on a lot, let’s criticize sexy school uniforms for both female and male idols, what is this with the nurse outfit?’
‘Please don’t use “innocence” or “innocent lyrics” as a defence. It can be innocent or not innocent, it shouldn’t matter either way. BP are not kids. They are grown adults. It’s when u use “innocence” that people can counter and say otherwise. The defence should be “so what if it’s not innocent?”‘
‘Jennie is playing a nurse, and a patient depicting innocent lyrics wearing a nurses uniform that is completely modified to accentuate the nurses figure. In other words in isn’t what nurses or doctors wear. The problem isn’t *Why* she wore, or her intent. the problem is precisely *what* she wore and the *form* it took. If she wore actually nurses scrubs, this conversation wouldn’t exist. and she would probably get applauded by some, and the criticisms would come in the form of “dear god why is she wearing something “ugly”, frankly I don’t think Blackpink can make anything look ugly, and if they wear anything that should be ugly they’d make it look good. They choose art, over realism, and I am going to presume ignorance for the sexualization of nurses issue. The Criticism serves to rectify the ignorance.

Medical scrubs are extremely easy to acquire. They don’t need to be purchased from any specialty store. By all means I would love to See Blackpink rock legitimate scrub fashion.

we should criticize any and all “fashion” than can lead to and overall contributes to the sexualization and harassment of the non-idol counterparts of the fashion wearers, Nurses, Policemen, Officeworkers, Students. It’s not that hard. People are people not objects for sexual gratification and to fetishize a profession (Including Kpop idol) is wrong.

The thing I find most hilarious but also sad. None has even called for the “cancellation” of Blackpink over this. It’s literally just criticize with justifications for the criticism of an outfit in a music video. but it shows where people’s hearts are: Either with the past, present and future victims of sexual harassment due to the sexualization of their profession (nurses) or with their kpop favs. I wouldn’t expect it to be such a hard choice.’