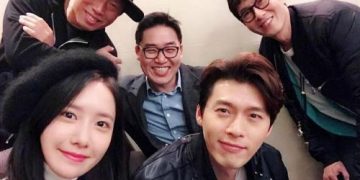 Girls’ Generation’s YoonA “Because Hyun Bin really is handsome, there was no need to act. ‘Handsome’ just came out of my mouth when I saw him.”

Girls’ Generation’s YoonA “Because Hyun Bin really is handsome, there was no need to act. ‘Handsome’ just came out of my mouth when I saw him.”

Girls’ Generation’s YoonA “Because Hyun Bin really is handsome, there was no need to act. ‘Handsome’ just came out of my mouth when I saw him.”
YoonA will be starring in the sequel with Hyun Bin and Yoo Hae Jin, who she co-starred with in “Confidential Assignment” in 2017. The two actors are also in talks to return for the sequel.
And she once revealed the reason for her and Hyun Bincos to easily create the sweet chemistry in the movie is because Hyun Bin is so handsome.
n the movie “Confidential Assignment,” YoonA was a scene-stealer. She said about the film, “I acted very comfortably. A lot of people told me that it was like how I was normally.” At this, Yuri agreed, “It was very much like the YoonA that we know.”

Jun Hyun Moo then asked whether it was helpful for YoonA to get into character because of Hyun Bin.

YoonA explained, “Because he really is handsome, there was no need to act. ‘Handsome’ just came out of my mouth when I saw him. It did help with my acting.”
The original 2017 film, which attracted over 7.81 million moviegoers, was directed by Kim Sung Hoon and told the story of North Korean detective Rim Chul Ryung (Hyun Bin) working with South Korean detective Kang Jin Tae (Yoo Hae Jin). YoonA originally played Kang Jin Tae’s sister-in-law. According to the reports, YoonA’s role will also be expanded upon in the sequel, making her the female lead. Although she played a supporting role in the 2017 film, YoonA caught the eyes of many viewers with her prominent acting.
A source from CJ ENM explained that YoonA’s character will showcase even more chemistry with North Korean detective Rim Chul Ryung (Hyun Bin) as he returns to South Korea once again for another joint confidential case in the sequel.