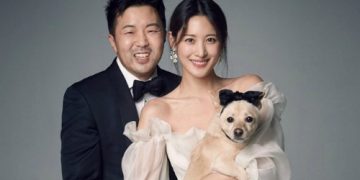 According to reports from Korean media on the afternoon of October 1, actress Kim Soo Hyun (Claudia Kim) became the mother of a baby and received many blessings from fans as well as colleagues.

Through her personal Instagram account, the 35-year-old beauty posted a photo of her newborn baby holding hands. The article has the following caption: “She is a little angel”. This detail revealed to the audience that actress Kim Soo Hyun’s baby is a baby girl.”

It is known that the actress married her husband of businessmen at luxury hotel Shilla in Seoul last December. The wedding was held privately with the participation of family and close friends and colleagues from both Im Siwan (ZE: A), Ha Seok Jin, Lee Ki Woo, Jung Ryeo Won, Sung Yuri.

It is known that Soo Hyun’s husband is known to be a Korean-American CEO – Cha Min Geun. The couple decided to get married after just a few months of publishing their love relationship in August this year. By April this year, she revealed through her management company that she was pregnant.

On the other hand, Kim Soo Hyun debuted in the entertainment industry as a supermodel in 2005 before expanding her career into acting. She was later cast in Hollywood movies like Avengers: Age of Ultron and Fantastic Beasts: The Crimes of Grindelwald. Husband Soo Hyun is currently the CEO of the Korean branch of WeWork, a business based in New York.