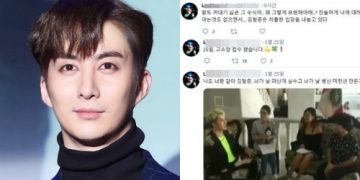 According to an exclusive report from Maeil Business Daily on the morning of September 29, SS501 member Kim Hyung Jun (33 years old) won the lawsuit for being accused of rape and being unjustly resolved. As a result, Ms. A – the male singer’s blame was sentenced to 8 months in prison after the trial on 25th at Goyang Branch, Uijeongbu District Court.
Last year, female ‘A’ filed a lawsuit against Kim Hyung Jun by claiming that they were acquainted about 10 years ago, and Kim Hyung Jun committed sexual assault against her in her home. Kim Hyung Jun then filed a counter lawsuit against ‘A’, claiming all of her accusations as false and demanding arrest for defamation of character.

Then, in June of 2019, prosecution dismissed ‘A’s lawsuit against Kim Hyung Jun for sexual assault on the basis that the lawsuit lacked sufficient evidence. Now, approximately a year and 6 months later, the court has found female ‘A’ guilty of making false accusations in her lawsuit and defaming the character of Kim Hyung Jun, therefore sentencing ‘A’ to 8 months in prison as of September 25.