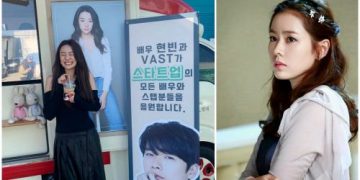 A few days ago Hyun Bin ent a coffee truck to the set of “Start-up” to cheer up young actress Stephanie Lee. This actress is very happy to receive a wonderful gift of encouragement from a handsome, kind senior.

Many fans believe that Hyun Bin’s caring for the young girl like this makes Son Ye Jin jealous. The two were angry, so Hyun Bin did not appear in Ye Jin’s online fan meeting on September 27. Instead, actor Yang Kyung Won was a special guest at the event.

However, others said that it is normal for Hyun Bin to care for his juniors in the same management company. He also did this before. As for Hyun Bin not attending Son Ye Jin’s fan meeting because he had to conduct self-isolation at home after returning from Jordan to Korea. There are also netizens guessing that Hyun Bin and Son Ye Jin originally wanted to keep a relationship privately, so it’s understandable that they avoid appearing together.
Hyun Bin did not appear in Son Ye Jin’s online fan meeting on September 27.