Son Ye Jin’s sharing in the fan meeting livestream is becoming the most discussed topic on social media.

On the evening of September 27, Son Ye Jin held a fan meeting through a live stream for fans in Japan.

Although Hyun Bin did not appear in Son Ye Jin’s fan meeting as hoped from fans, netizens revealed the hidden love related to this couple.

Specifically, during the fan meeting when asked by the MC about how often Son Ye Jin cooks, the actress immediately shared, “I don’t have much cooking time but lately I cook. I cooked pasta and a kind of Chinese food”. 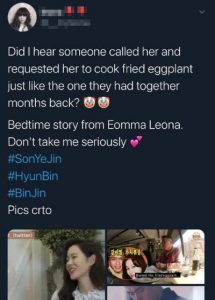 These shares of Son Ye Jin immediately became the topic of discussion on social networks. Because, earlier in a Youtube vlog a culinary expert came to enjoy the food at a Chinese restaurant. Here, the owner of the shop revealed that, previously, Hyun Bin and Son Ye Jin came here together to enjoy a Chinese dish. 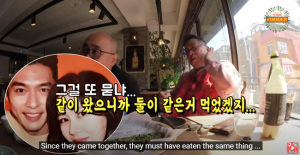 Coincidentally, this is the dish that Son Ye Jin mentioned in the recent fan meeting. This makes people question that the couple often date secretly during the past time. Some even guessed that the couple were dating at Son Ye Jin’s private house. Here, Son Ye Jin also actively cooks Chinese dishes that she and Hyun Bin like it.