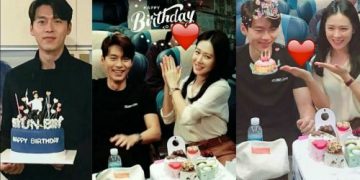 Today, September 25 is also the birthday of Hyun Bin, 38 years old, besides the congratulations to the famous actor, the pictures and clips of Hyun Bin’s past birthday are also “dug” again, in which the video of “rumored lover” Son Ye Jin singing for Hyun Bin’s birthday is being shared by fans around the world.

Accordingly, the video was filmed 2 years ago at the time of promoting the movie The Negotiation, when Hyun Bin was just 36 years old. To bring a surprise to the actor, the crew and the audience sang the birthday song together to Hyun Bin at the press conference.

Because he was quite surprised with this special gift, Hyun Bin showed an embarrassed expression. In particular, netizens also observed the actions of the director of the film The Talk about Life and Death. Before starting the birthday song, director Lee Jong Suk pointed in the direction of Son Ye Jin to invite the actress to sing first. Many netizens believe that this is no different from the “signal” attributed to the director for this cult duo.

Son Ye Jin and Hyun Bin revealed their dating photos in early January 2019, after the two acted together in the movie The Negotiation. That is why few people pay attention to the couple’s chemisty performances at the time of promoting this movie.