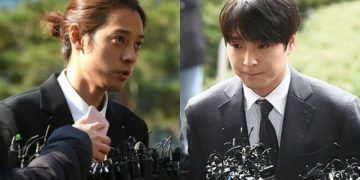 In the end, Jung Joon Young and Choi Jong Hoon had to get the final results from the Seoul court for their rape charges.

At 10:10 am (KST) on September 24, the Chief Justice of the Supreme Court of Region Two – Park Sang Ok ruled that the appeal of Jung Joon Young and Choi Jong Hoon was denied. Initially, the two stars filed an appeal in the second trial.
Last November, the Seoul Central District Court sentenced Jung Joon Young to six years in prison and Choi Jong Hoon to five years in prison for charges including aggravated rape (i.e., rape that involves two or more perpetrators). Both the defendants and the prosecution appealed the ruling, leading to a new round of hearings this year.

In May, the Seoul High Court reduced Jung Joon Young’s prison sentence to five years, while Choi Jong Hoon’s prison sentence was reduced to two years and six months. Both defendants went on to appeal the new ruling as well, which brought the case to the Supreme Court.