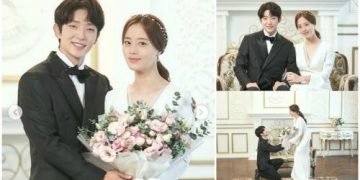 With only the finale left, tvN’s Wed/Thu drama ‘Flower of Evil’ captivates viewers with Do Hyunsoo and Cha Jiwon’s wedding photos. 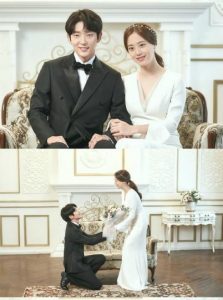 The stills show Hyunsoo and Jiwon having their wedding photos taken, as any couple preparing for their wedding does. Decked out in a black tuxedo and a white dress, respectively, Hyunsoo and Jiwon face each other, filled with love and happiness, bringing a smile to viewers’ faces.
.
Also, the photo of Hyunsoo kneeling down on one knee and handing a bouquet and Jiwon accepting it gives off a romantic vibe. It is all the more touching, especially because this is a past scene in which the couple still have no idea what life-threatening crises they are going to face in the future.
.
In the previous episode, Hyunsoo had a faceoff with Baek Heeseong, the accomplice in the Yeonju serial murder case. Tricked by Heeseong into believing his wife was killed, Hyunsoo couldn’t believe the woman he was seeing before his eyes was Jiwon. But when Jiwon desperately called him, he came to his senses and took a step towards her. Just then, Heeseong fired at them and Hyunsoo got shot, falling down and becoming unconscious.
.
As this accident happened when they thought everything was coming to an end, Jiwon, Hyunsoo, and even viewers were left feeling brokenhearted. Hyunsoo had only recently realized his feelings for Jiwon, and Jiwon has loved him for 14 years no matter what. Viewers will find out what choice the couple will make, and whether or not they can be free from everything that has made them suffer.
.
The finale of Flower of Evil is airing on September 23 (Wed) at 10:50 p.m.
Source : naver