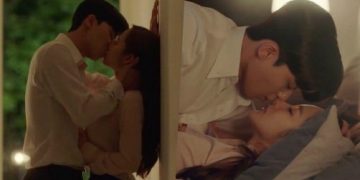 Subscribe to lovekpop95.com to September 19, a scene from the drama What’s wrong with secretary Kim? , with the contribution of Park Seo Joon and Park Min Young, has received a lot of attention from the public. And it achieved the record of 254 million views on the youtube platform. A record number for a movie.

The content around the story about the ambitious, narcissistic and proud vice president of a big company – Lee Young Joon (Park Seo Joon) and the highly capable secretary that the male lead is always dependent on. Unconscious – Kim Mi So (Park Min Young). The couple has a very perfect boss-secretary relationship and great teamwork.

However, misunderstandings began to arise when one day Kim Mi So decided to resign after working with Lee Young Joon for 9 long years. From there, Young Joon realizes that he cannot live without Mi So and he decides to do whatever he can to make sure Mi So is always with him.

Their love story at first feels uncomfortable because Young Joon’s love for Mi So only becomes clear when she decides to give up. So his original romantic move towards Mi Soo was understood as how he persuaded her to stay as his secretary, which left Mi So in disbelief.

Everyone knows Mi So is not only an ordinary employee in the office, but also a friend and the only person he can trust. Young Joon allows Mi So to enter a private space so she can choose the clothes he wear to work. She even drove him home after getting drunk, adjusting the skewed tie on his shirt.

If you are a huge fan of Korean romantic comedy dramas What’s wrong with secretary Kim? Probably one of the best you really love. It has been more than 2 years since the movie ended, but the story is still intact in the minds of audiences.

In addition, it seems that fans are still extremely excited about the drama since a clip filmed the hot kiss scene of Park Seo Joon and Park Min Young. According to reports, this kiss scene has passed nearly 254 million views on YouTube.

This scene is in episode 13. That was when Mi So decided to stay at Young Joon’s house. And instead of being passive letting things happen, this time she’s an energetic and enthusiastic girlfriend. Previously, Mi So tended to be willing but worried when there was a romantic move with Young Joon, but in this episode, it’s completely different.

Many commented that the main couple showed their amazing chemistry in this intense kiss scene. Yes, we can all agree that Park Seo Joon and Park Min Young perfectly portray their love story in the drama. Besides, a rumor about the couple has been posted online. However, both have denied it.