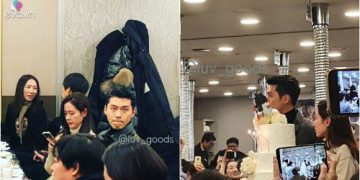 Recently, on social networks, there was a stir before a series of photos taken by Hyun Bin and Son Ye Jin. There are many rumors that the couple was caught going to a wedding, so they have to sit together. However, right after that, the owner of the photo corrected the fans.

It is known that this series of photos was taken at the time Hyun Bin and Son Ye Jin participated in the celebration party of the movie Crash Landing On You last February. Because the press work inside is not allowed, the series of photos at the party is quite rare and has not been published until now. 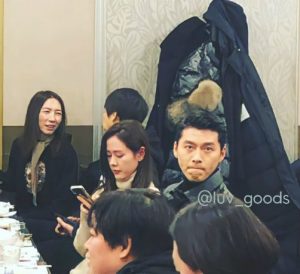 In the published photo series, it is easy to see that Hyun Bin and Son Ye Jin are very affectionate together. Both are also extremely comfortable communicating with everyone. The crew was very happy with the success of the crew Landing where he was. 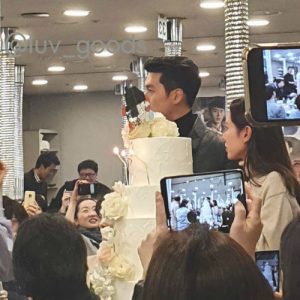 However, because the outfits in the picture are different from the outfits taken by the reporter, fans mistakenly thought that Hyun Bin and Son Ye Jin went out separately and went to a wedding party. Finally, fans are once again waiting for the news of the Crash Landing On You duo.

Hyun Bin and Son Ye Jin are a couple that received a lot of attention from TV viewers in early 2020. After collaborating in the movie Crash Landing On You, the two quickly became suspicious of dating. Since they are all famous single actors and actresses in the entertainment industry, fans hope they can go home together in real life.

Moreover, in 2019, people once caught Hyun Bin and Son Ye Jin going to a supermarket together in the US. Although their agency denied the two were dating and said that the two artists were just friends, no one would believe it. By the time the movie Crash Landing On You aired, this rumor resurfaced.

Not long ago, an expert confirmed that Hyun Bin and Son Ye were dating. The expert also added that the famous couple wants to wait for their current relationship to become more stable before announcing. Moreover, recently there have been many couples, especially Song – Song (who plays Descendants of the Sun) quickly getting married but no happy ending, so Hyun Bin and Son Ye Jin are quite careful when mentioning Love story.