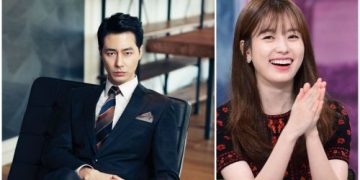 On the morning of September 9, an exclusive report from Sports Chosun reported that Jo In Sung and Han Hyo Joo will officially participate in the new drama project led by Marriage World director Mo Wan Il titled Moving.

The set of Dispatch photos that secretly took Song Hye Kyo and Jo In Sung together in the middle of the night caused a stir in social networks, dating or what?

Moving is a drama that marks Jo In Sung’s drama comeback after 6 years since SBS’s It’s Okay, That’s Love, aired in 2014. Possesses a handsome, elegant appearance. With a height of up to 1m88, Jo In Sung was once known as “the first male beauty in Korea”.

Possessing the best smile on the second screen of Kim Chi, Han Hyo Joo, an actress who has been appreciated through famous TV series and movies such as: Spring Waltz (2006), Iljimae … Moving marks the time The actress’s drama reappearance after 4 years since MBC’s W – Two Worlds era in 2016. Possessing a fresh and beautiful look, with stable acting, Han Hyo Joo is currently a beauty. great attraction on the Korean film screen.

Moving tells the story of the growth of high school students and the student’s parents who are carrying secrets unknown to others. The film, led by Mo Wan Il, who is famous for the horror series Misty and The World of The Married, is slated to air in the second half of 2021.