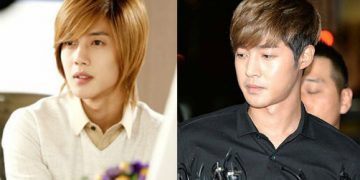 On the evening of August 31, Korean media reported that Kim Hyun Joong had saved the life of a chef unconscious from a stroke in the restaurant. It is known that the incident took place at 9:50 pm on August 24 at a Japanese restaurant in Seogwipo, Jeju Island.

Specifically, while checking the order and the final sales, the 47-year-old chef suddenly has a stroke, unconscious. Hearing the staff screams, a guest preparing to leave entered and gave first aid to the victim. At this moment, everyone still does not know it is Kim Hyun Joong.

After checking the chef’s situation, Kim Hyun Joong immediately raised his head, unbuttoned his shirt so that the victim could breathe and asked the staff to call for an ambulance. At this time, Mr. Oh could not open his mouth due to the spasticity of the body, the actor of Boys Over Flowers quickly took first aid measures, including massage of the chest, abdomen, and ice packs for the victim. Kim Hyun Joong also talked non-stop to help Chef Oh not fall into a coma.

After 9 minutes, the victim gradually regained consciousness and now the ambulance arrived, Kim Hyun Joong continued to help put Chef Oh on the ambulance. So far, this chef has recovered and shared the story: “At that time I did not know that the first aid person for me was a celebrity, it turned out to be Kim Hyun Joong”.

Upon realizing that the person who had helped save the chef’s life was Kim Hyun Joong, the restaurant owner reported the good deed to the media and expressed his gratitude.

A representative from Kim Hyun Joong’s agency confirmed that the person in the CCTV footage was Kim Hyun Joong and stated, “He only did what he had to do.”

Kim Hyun Joong is planning to greet fans all over the world through an online concert in October.