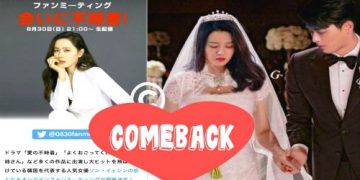 A few days ago, Hyun Bin just made fans extremely excited when he revealed that he was planning to return to Korea at the end of this August or September after he finished filming the scenes in the movie Bargaining in Jordan. The actor said he will hold a fanmeeting with fans in Japan to express his gratitude to audiences in this country as the movie Crash Landing On You starring Son Ye Jin has consistently topped Netflix for more than 6 last month. 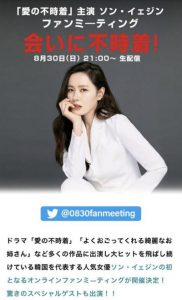 Immediately after Hyun Bin’s revelation, Son Ye Jin also recently made a surprising move when announcing that she would hold an online fanmeeting for fans in Japan on August 30. Especially in the announcement poster also revealed, “There will be a shocking special guest”, causing the audience to question whether this is Hyun Bin and the fact that the actor revealed his return to the country is to Reuniting with Son Ye Jin for this special event?

It is known that Son Ye Jin’s purpose for holding a fanmeeting exclusively for Japanese fans is because her movie Crash Landing On You has consistently ranked at No. 1 and has been the topic of discussion of the audience throughout the past months.