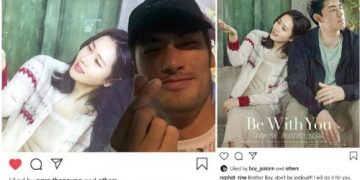 In the first half of 2020, tvN’s drama Crash Landing On You has become a “syndrome” spreading throughout Asia and international markets. Therefore, the public around the world began to pay great attention to “beautiful sister” Son Ye Jin, leading to an incredibly strong fandom. Not only fans, but also celebrities, are crazy about Son Ye Jin’s beautiful looks, and admirable acting.

Recently, two Thai actors, Boy Pakorn and Nine Naphat, have expressed their love for Son Ye Jin when continuously posting photos with her.

Specifically, when actor Boy Pakorn posted a series of photos of his face in the poster of the movie Landing where he replaced Hyun Bin and Be With You instead of So Ji Sub, Nine Naphat immediately grafted his face. Enter with the provocation: “Brother, don’t be jealous. I’ll do it for you. #BeWithYou. The movie is so fun. I want to be with you Son Ye Jin.”

Nine Naphat and Boy Pakorn collects photos with Son Ye Jin, which makes fans extremely excited. Although it was just a joke of two Thai actors, many fans who pushed the boat “BinJin” repeatedly called for Hyun Bin, so be careful with this public hearing lest they “lose lover”. .

Nine Naphat was born in 1996, the son of Moo Pimpaka – Thai actress and runner in 1988. Handsome, from a family with artistic traditions, Nine Naphat was soon caught by the Golden Temple entertainment industry. . However, his name really only shines when he takes on the role of Palm – the ideal close friend of every girl in the cult movie Love the wrong best friend – Friend Zone.

Meanwhile, Boy Pakorn born in 1984 is also a familiar name to Vietnamese audiences through films such as Heaven with you, Beloved Island, Darkness of Love, Jokes of God. He is also the star who is always in the top of the most desired male beauty by Thai women and men.