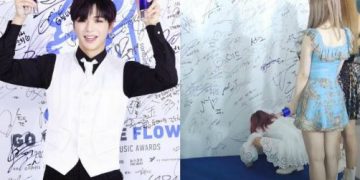 This small detail is said to have "denounced" the real relationship of Kang Daniel - Jihyo couple at the present time.

Just a year ago, Dispatch newspaper opened the dating news of Kang Daniel and TWICE’s Jihyo, making Asia go viral. The two management companies have confirmed that the couple are in a romantic relationship, fans are shocked because the two seem unrelated, there is no interaction before.

A year has passed since making their love public, Kang Daniel and Jihyo turned to secret dating, not appearing together, not mentioning each other, avoiding meeting in events. The couple was suspected by the Korean audience and media that they broke up due to a series of incidents such as not paying attention to each other at AAA 2019 Vietnam, shortly after that a famous Indonesian artist confirmed that they had farewell; Daniel continued to press the button to follow the Instagram of a strange girl … But recently at the Soribada Best K-Music Awards 2020, thanks to a small detail that fans gave as evidence to prove proves that Kang Daniel and TWICE’s Jihyo are still happy together.

Specifically, the small detail that netizens can spot here is … a signature. At the end of the awards ceremony, the participating artists signed their names on a wall. Here, Kang Daniel bent down to the low corner to sign. After a while, TWICE came to sign and after it was done, Jihyo suddenly lingered to sign one more time next to Kang Daniel’s signature.

This action made the fans of the couple happy, when it was confirmed that the rumors that the couple had “broke” were bullshit, Daniel and Jihyo were still happy together. However, many people think that leader Jihyo only signed on behalf of the absent member Jeongyeon, she signed next to Kang Daniel’s signature because there was no room above.

Netizens believe that this is Jihyo’s action to show his love for boyfriend Kang Daniel.