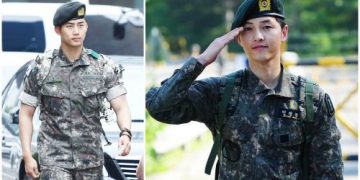 It seems that 2020 is the time of Song Joong Ki’s hardest work as he constantly confirms his participation in various film projects. On August 10, the press reported that the actor with Jeon Yeo Bin and Taecyeon (2PM) will take on the lead roles for tvN’s Vincenzo.

Vincenzo is a film about Vincenzo Cassano’s return to Korea – a lawyer and the godfather of the Italian Mafia to resolve internal organizational conflicts as well as related to Korean lawyer Hong Cha Young . After many struggles, synergies, the two have together won justice by methods dedicated to the underworld.

In the movie, Song Joong Ki will play Vincenzo Cassano – a Korean adopted by an Italian family since he was a child. Equipped with negotiation skills and possessing unrivaled charisma, Vincenzo Cassano lives to take revenge as an Italian Mafia boss. Once, Vincenzo discovered an evil gang, deeply rooted in Korea. This led him to return to Korea and associate with lawyer Hong Cha Young.

Jeon Yeo Bin will play the lawyer Hong Cha Young, the steed of Korea’s best law firm Woosang. She has a unique perspective on problems and is noticed by Vincenzo Cassano for her talent. Meanwhile, Taecyeon will play the role of Jang Jun Woo, a handsome, intelligent trainee who always has a carefree smile and a somewhat awkward, awkward personality. He had absolute confidence in Hong Cha Young and the appearance of Vincenzo Cassano sparked the character’s competitive spirit.

Vincenzo belongs to the dark comedy genre with the image of an “anti-hero” character who often punishes evil with his own evil. With a new development direction, unique character image and famous cast, this will be a movie to look forward to in 2021.