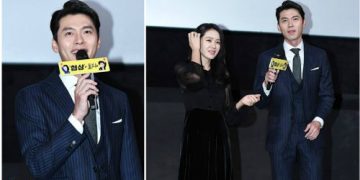 Currently, information has determined the date of returning to Korea after a month’s flight to Jordan to complete the movie Bargaining which is causing fever among fans.

Especially Hyun Bin and his Ekip decided to hold a fanmeeting to meet his fans in Japan to thank the Japanese fans for his love for him.
The fact that the actor returns to Korea this September makes fans of Hyun Bin and Son Ye Jin extremely excited, because this September the Seoul International Drama Awards 2020 will be held. and the movie Crash Landing On You is also receiving a best film Mini-series nomination.

In addition, if the fanmeeting is held, it is likely that Hyun Bin will reunite with Son Ye Jin on this special day. In addition, September 25 is also the actor’s birthday. Because of that, the audience is hoping that the scenes in the Bargaining movie will be completed smoothly so that the actor will soon return to reunite with fans as well as Son Ye Jin.
Besides planning for fanmeeting to meet his fans in Japan. The couple Son Ye Jin and Hyun Bin will have a chance to reunite at the 2020 International Drama Awards. The couple promises to win an award for the title of best male / female lead.