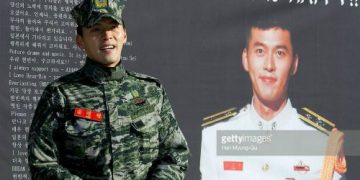 Despite the worsening political relationship between Korea and Japan, Korean dramas like 'Crash Landing On You' are becoming so popular in Japan that it almost creates a syndrome.

Takao Yamada, the special editor of the Mainichi Newspaper, introduced an anecdote in a subscription column published on August 10. The anecdote said that Mr. Yamada asked the Japanese Foreign Minister. Toshimitsu Motegi sees if he watched “Crash Landing On You”, in which the writer replied, “I watched all the episodes.” At the time, Mr. Yamada was watching the third episode of the 16-episode series and the Minister even joked that he was behind the episodes.

Special editor Takao Yamada praised the film when he said in the column, “The idea of ​​making a romantic comedy about a love story between a North Korean soldier and a Korean businesswoman is new. The film portrays life in North Korea as truthfully as possible. ”

According to Netflix Japan, ‘It’s Okay No To Be Okay’ came in first place, and ‘crash Landing On You‘ came in at number two in the overall rankings in Japan. For now, ‘Itaewon Class’ has taken fifth place while ‘Crash Landing On You’ continues to hold second place.

As the popularity of ‘Crash Landing On You’ increased, the main actor, Hyun Bin ‘

Hwang Sung Woon, Director of the Korean Cultural Center in Japan, said: “Hyun Bin’s character, who is strong-willed and helps women well, is especially popular. I was surprised to see his popularity continue even though the ranking of the drama dropped. ”

Previously, actor Bae Yong Joon led the boom of the Korean Wave by creating the “Yon-sama” syndrome through the 2003 drama ‘Winter Sonata’. When the drama aired in Japan, Bae Yong Joon’s character, Yon-sama, was loved by Japanese women for his character depicting the unchanging pure love.
Source : Allkpop.