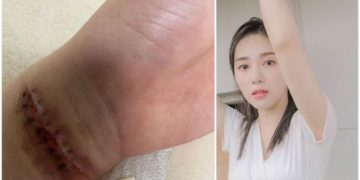 [Update] AOA’s Mina cut hand commits suicide, remember Sulli: she haunted, unable to forgive Jimin!
Kwon Mina caused a stir when he committed suicide and was taken to the hospital for treatment.

Kwon Mina – a former member of AOA, continued to worry fans and the public by continuing to harm themselves. Specifically, the 26-year-old star has uploaded a photo of his wrist slitting on his personal Instagram account.

In her new post, Mina shows stitches on the wound along her wrist. In addition, the female singer also updated a long post with content that seemed to have something of a conflict with the management company FNC.
She continued to vent out her frustrations along with suspicions that the therapist hired by FNC had leaked information about her to other clients as well as suspicions that Jimin will return to the entertainment business once things turn quiet.

“Everyone saying I’m making everyone into an attacker since I feel like the victim. No, I only told the truth. I never said they were the attackers, I said they were the bystanders. It’s the truth, they just watched. I probably did some things wrong. That might be right. There might be a problem with my personality but they bled me dry over the eleven years making me take one all sorts of mental disease. Yet, not one person gave me a sincere apology. Isn’t that just too much..? Am I being too selfish? Am I expecting something too big? Am I only thinking about myself thinking I had a hard time? But I want a sincere apology. What did my family ever do wrong? They said they’re scared, they want to stop coming to the emergency room crying. Still, their the family that haven’t said anything to them or that person. I tried to talk to the people there but they all out of contact. I’m scared too. I’m scared about how much more I’ll become broken. I’m scared of what I’ll do to myself. Not in a sane mind, I revealed to the world what I couldn’t say to my family or friend over the past eleven years but what comes back to me is that it’s ultimately my fault. I’m sorry but I had a really hard time… I’m still having a hard time…it’s very hard.”