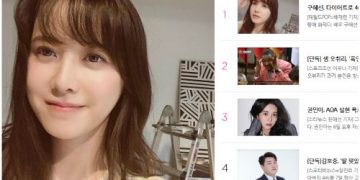 On the night of August 6, Goo Hye Sun updated a number of new images on the social network Instagram. It became the spotlight of public opinion when “the grass” appeared 15 days after completing the divorce proceedings with Ahn Jae Hyun last month.

In her post, Goo Hye Sun works from late at night until early morning but still confidently shows off her pure, goddess beauty. The 35-year-old actress shared: “Working crazy”. In addition, she revealed the event prepared by the new agency and said: “My company likes this event. But I am an INTJ (short for Introversion – Ntuition – Thinking – Judgment) “.

Just with these simple posts, a social network account is enough to make Goo Hye Sun topped the Naver homepage. She has become a hot topic because she possesses a more innocent appearance after dieting.

Topped the ranking of most read articles in Naver.
Previously, the Meteor Garden actor confirmed that he had lost 11kg to 46kg with the diet method. Therefore, she is more beautiful and adorable than ever. In September last year, Ahn Jae Hyun filed a divorce lawsuit against Goo Hye Sun. On July 15, she agreed to reconcile the divorce case with her ex-husband, and each of them went their separate ways.