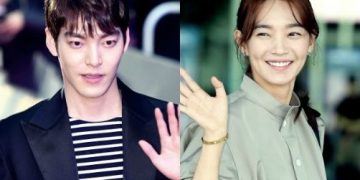 Shin Min Ah and Kim Woo Bin have been involved in the work of helping flood victims.

According to a report from TV Report on the afternoon of August 5, the famous couple Kim Woo Bin and Shin Min Ah together donated 100 million won, to help victims of the flooding in Korea.

Specifically, sources in the industry revealed that Shin Min Ah and Kim Woo Bin personally donated 50 million won to those in need. With sincere love, they hope that this insignificant amount can become a small consolation. It is also of benefit to many in need of assistance across the country due to the effects of heavy rains that have caused floods.

This is not the first time the couple has done well with the public. From 2009 to the present, Shin Min Ah has continuously shown his warm heart to the public in various social fields, including supporting the cost of support for the elderly, victims of burns and educational support for the less fortunate children.
In addition, the media also said that the 36-year-old star quietly helped the weak, such as supporting many problems for children.

In particular, during the Covid-19 epidemic earlier this year, both Kim Woo Bin and Shin Min Ah left a good impression in taking the lead in charitable donations. They want to prevent the epidemic as well as help those who do not have enough income, the health workers working in the war with Covid-19.