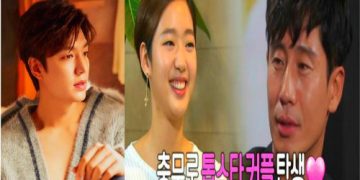 Before getting into the dating rumors with Lee Min Ho, it was not known that Kim Go Eun had a love affair with a boyfriend who is 17 years older than her – actor Shin Ha Kyun.
Kim Go Eun – New Star of Korean Showbiz, She is considered to be a talented actress, good at acting and showing great emotional states. Currently, she is creating a fever after combined with actor Lee Min Ho in The King: Eternal Monarch. 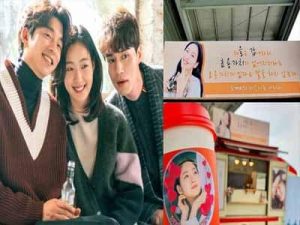 Kim Go Eun and Shin Ha Kyun suddenly announced dating from June 2016. At that time, the whole Korean showbiz was shocked, many fans protested because of their age, Shin Ha Kyun was 17 years older than Kim Go Eun. Many fans even predicted that they would break up quickly.
After only 8 months of being together, the couple surprised Korean Showbiz by announcing their breakup due to busy schedules and no time for each other.
After the Korean media published the information, the management company of the two actors also confirmed.
The company said, “The two broke up at the end of February. They felt apart because of their busy schedule. They will continue to maintain their hoobaes, seniors and help each other at work. “.

According to the media, the large gap in age makes the two of them gradually separate from each other and think that the feelings are not love but only feelings of “Seniors – juniors”.
Honestly, Shin Ha Kyun is really not suitable for Kim Go Eun, Because the age gap is too big, it will easily cause them to have disagreements about lifestyle, … So the fact that they broke up does not cause the audience surprise.

2. Kim Go Eun rumors boyfriend – Lee Min Ho.
After the success of The King: Eternal Monarch, Lee Min Ho and Kim Go Eun received great attention from the fans. Therefore, many fans have “pushed the boat” for this couple now. However, whether they actually dated or not, both had never acknowledged or denied it. But the rumors they are dating in the media are still going on.
The sweet behind-the-scenes moments created by Lee Min Ho and Kim Go Eun made fans believe that they would really be a good couple if it happened in real life.
Earlier on July 7, an account posted on Pann wrote: “Lee Min Ho is definitely dating Kim Go Eun” with a series of photos, reproduc more than 240,000 views and discussion.

The first is a walking video by the Han River that Lee Min Ho posted on July 2 – Kim Go Eun’s birthday. The actor to the song Dancing Universe – the soundtrack of The King: Eternal Monarch – with the lyrics: “This universe is a place where you and I dance. A place for us to hold hands tightly. It feels like a dream.” . The video attracted over 4.6 million likes and hundreds of thousands of comments, most of which mentioned Kim Go Eun’s name. The author compared the images of the two actors posted on the same day with similarities in the context, objects … showing that they were together for Go Eun’s birthday.

Posts quickly attracted the attention of the online community. Most viewers believe they are dating. Minzy’s account wrote, “They are so beautiful and at the age of maturity to enter into a relationship. Lee Min Ho – Kim Go Eun, be happy.” Meanwhile, the audience member Hoojun commented, “Lee Min Ho likes Kim Go Eun through his eyes. What a special girl.”
At the moment, both of them have not yet spoken about the rumor.