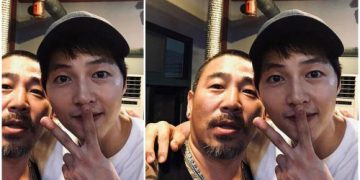 The latest picture of Song Joong Ki in the middle of Song Hye Kyo's love scandal - Hyun Bin has been shared.

On July 30, Song Hye Kyo made a tough move when he denied the dating rumors with actor Hyun Bin shimmering for a long time. The actress even said that the incident was due to the excessive imagination of some Chinese-language media, fabricating information is not a day-to-day affair.

Amidst the scandal of the ex-wife’s scandal, the latest picture of Song Joong Ki was suddenly shared. Taking a picture with a friend, Song Joong Ki was cheerful and radiant, even posing with a V-shaped hand, eyes looking straight into the camera.

Song Joong Ki’s attitude immediately attracted many netizens’ comments. Page QQ even analyzed the finger of the male actor Song placed in front of his mouth which means “keep quiet, no response” amidst the love affair of his ex-wife. In addition, the image of Song Joong Ki happily also made netizens think that he is having a single life of his own, relaxed, without pressure.

However, the QQ site said that, despite being divorced for more than a year, the image of the Song – Song couple is still tied together. The best of his actions will bring the market to the enemy by the high level of public interest. Previously, there was information that Song Joong Ki is currently dating a beautiful female lawyer but the male actor has denied it.