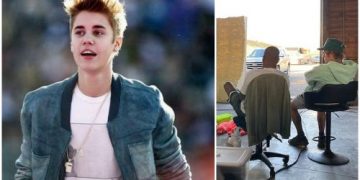 Justin Bieber goes to see Kanye West, advises him not to avoid his family and to make up with his wife Kim Kardashian.

On July 29, People sources said Justin Bieber was the one who encouraged Kanye West to sit down after the rapper posted a series of articles criticizing the family on Twitter. Bieber and his wife Hailey Baldwin flew to Cody City on July 24 to meet West. The two talked about music, running for president and psychological illness.

Justin Bieber experienced a period of psychological crisis after parting with Selena Gomez, making him understand Kanye West’s mood. The two are also close friends for many years, having the same manager. In the past, Bieber had publicly defended Kanye West when quarreling with Taylor Swift.

A day later, Kanye West publicly apologized to his wife on social networks. Kim Kardashian flew from Los Angeles to Cody to visit her husband. The two went to lunch and talked for a long time in the car. She worries about Kanye West after hearing that he came to the emergency department at a hospital near his home due to stress. Kim Kardashian stayed with her husband for a day and then returned to Los Angeles to look after her children.

Last time, Kim tried to advise her husband to treat bipolar disorder, but he disagreed, thinking his wife wanted to confine herself to a mental institution. West left his family to plant music and run an election campaign for the US president. He avoids calls from relatives and friends to focus on work.

Kanye West was born in 1977 in the city of Atlanta, Georgia, USA. He started singing in 1996 and became one of the most successful artists in the 21st century, selling over 140 million records. He dated Kim Kardashian from April 2012 and married two years later. The couple had four children: North (seven years old), Saint (four years old), Chicago (two years old) and Psalm (one month old). In April, Forbes magazine confirmed the singer won the title of billionaire, owning assets of about $ 1.3 billion.