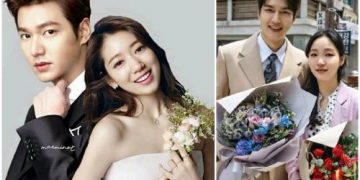 Lee Min Ho is in talks to star in a new drama with female lead actress Gong Hyo Jin!

You will probably never forget the amazing chemistry of the Minshin couple in The Heirs (2013). The Heirs has created a huge fever worldwide, It can be said that at present, there has been no film in the Korean film industry that has surpassed the HOT level and the strong spread of The Heirs.

After the success of The Heirs (2013), millions of fans around the world “pushed boats” Min Shin!
Lee Min Ho is often rumored to be dating his co-stars, and Park Shin Hye is one of them. In the moment of joining The Heirs, both for many sweet compliments. Rumors of their relationship became more noticeable in January 2014 when Sina posted, Lee Min Ho confirmed that he was dating but quickly broke up with a girl a year earlier, in 2013.

Coincidentally, 2013 was also the time when the Lee family met Park Shin Hye on the Heir set. Soon after, both management companies denied, however, in an interview, Park Shin Hye said she was happy to have rumors dating with colleagues.

After the success of The King: Eternal Monarch, Lee Min Ho and Kim Go Eun received great attention from the fans. Therefore, many fans have “pushed the boat” for this couple now. However, whether they actually dated or not, both had never acknowledged or denied it. But the rumors they are dating in the media are still going on.

Earlier on July 7, an account posted on Pann wrote: “Lee Min Ho is definitely dating Kim Go Eun” with a series of photos, reproduc more than 240,000 views and discussion.

The first is a walking video by the Han River that Lee Min Ho posted on July 2 – Kim Go Eun’s birthday. The actor to the song Dancing Universe – the soundtrack of The King: Eternal Monarch – with the lyrics: “This universe is a place where you and I dance. A place for us to hold hands tightly. It feels like a dream.” . The video attracted over 4.6 million likes and hundreds of thousands of comments, most of which mentioned Kim Go Eun’s name. The author compared the images of the two actors posted on the same day with similarities in the context, objects … showing that they were together for Go Eun’s birthday.

Posts quickly attracted the attention of the online community. Most viewers believe they are dating. Minzy’s account wrote, “They are so beautiful and at the age of maturity to enter into a relationship. Lee Min Ho – Kim Go Eun, be happy.” Meanwhile, the audience member Hoojun commented, “Lee Min Ho likes Kim Go Eun through his eyes. What a special girl.”
At the moment, both of them have not yet spoken about the rumor.